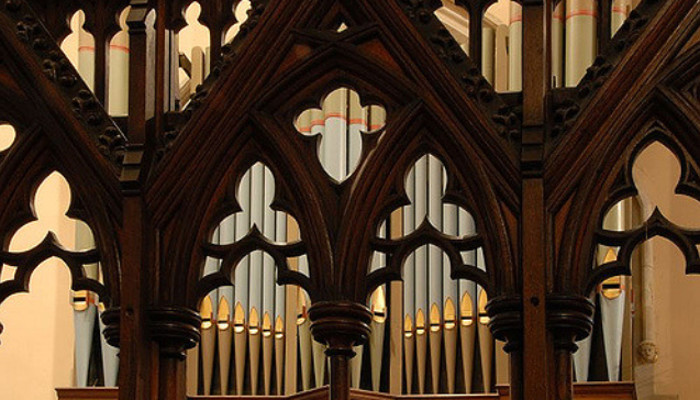 The organ in St Mary’s has a fine pedigree, being built and developed over the years by some of the finest organ builders in Britain. Originally constructed in romantic style by William Hill in 1871, it was subsequently rebuilt and enlarged in 1909, by Harrison and Harrison.

In 1909, it was one of the largest organs of its kind in Britain and still contains much significant and historic pipework.

After such a long period of continual use the organ is now suffering from wear and tear which greatly limits its usefulness, accessibility and reliability, to the extent that it has become more and more difficult to manage and play. If this repair work is not done soon the organ will fall silent and be lost to current and future congregations at St Mary’s.

Therefore, we have launched the Organ Appeal.  Please click here to find out how you can make a donation and support this.

Why should we do this?

St Mary’s is a very popular venue for choirs and orchestras from all over the world, not just Scotland, and the City of Glasgow, and this project will ensure that we continue to attract the best performers from all over the world to perform here, as well as supporting our busy programme of services, concerts and national broadcasts.

In spite of the increasing limitations of the organ, music at St Mary’s is internationally recognised with a reputation for excellence, through the quality of its mixed voice choir, which is one of the finest in the country, and through its regular broadcasts on BBC radio and television.

A large part of the choral activities has been to educate and instruct our young choristers, many of whom have gone on to obtain Choral Scholarships at prestigious institutions.  Over the last few years, we have had choristers go on to choral scholarships at at Trinity, Jesus, Selwyn, and Gonville & Caius Colleges in Cambridge, Merton College and Christ Church Cathedral in Oxford, as well as places at Gloucester Cathedral, and many Scottish Universities including Glasgow, St Andrew’s and Aberdeen.  Several former choristers have also gone on to study singing at the Royal Conservatoire of Scotland, the Guildhall School of Music and Drama, and the Royal Academy of Music in London.

Our musical reputation has recently been greatly enhanced by our young Assistant Organist, Steven McIntyre, being elected a Fellow of the Royal College of Organists (FRCO) and winning the Limpus Prize for the best organ playing in the examination.

The renewed organ would continue to develop the relationships we have already built and be used as a tool for education and outreach, consolidating links with the Royal Scottish National Orchestra, Royal Conservatoire of Scotland, Glasgow University, Strathclyde University, the Royal School of Church Music and local schools.

This is a once in a generation opportunity to secure, for the next 50 years or so, the legacy of an organ of international stature, not just for St Mary’s, but for the whole city of Glasgow, the wider community and, indeed for the whole of Scotland and beyond.

What do others think?

David Dimbleby, Broadcaster, writer, and journalist – “I have heard the choir at St Mary’s and know how important their music is to Glasgow. A new organ will attract choirs and organists to the city from all over the world. It is a thrilling development and I urge everyone who values fine singing and playing to support it. The cathedral is a beautiful venue and deserves only the best.”

Dr Gordon Stewart, International Concert Organist and Conductor, Organist in Residence, Huddersfield Town Hall – “I am delighted to support the restoration of the historic organ in St Mary’s Cathedral in Glasgow. It is a very fine instrument, but after many long years of service there are clearly mechanical and tonal problems which need attention. I have no doubt that in the hands of Harrison and Harrison, one of Britain’s leading organ builders, the newly restored organ will be a magnificent enhancement of the Cathedral’s imaginative liturgy and its broadcasts.  Sitting as it does in that great building, it would be my hope that it would become an important part of the musical life of the whole City of Glasgow.”

Dr George McPhee, MBE, Director of Music, Paisley Abbey – “It is with great delight that I write in support of the Appeal for the rebuilding of the organ of St. Mary’s (Scottish Episcopal) Cathedral, Glasgow.

I knew the instrument well in the early 1960s when I used to deputise for Albert Healey, the organist at that time. In these days I was aware of the organ’s superb tonal richness which admirably matched the acoustical properties of this glorious church. Unfortunately it seemed to me that much of the intrinsic Harrison & Harrison qualities were lost in inappropriate work which was carried out several years later. I am therefore excited to know that plans are being made to both restore and sensibly enhance the capabilities of this outstanding instrument.

In recent years the Cathedral’s worship has been greatly supported by an excellent choral tradition of national importance which has been enthusiastically built up over the years by Frikki Walker, the present Director of Music. Presently the accompaniments for the choir along with the general adornment of the Cathedral’s liturgy are being hampered by an ailing organ. It is therefore satisfying for all of us to know that this Appeal is being launched so that the musical spectrum can be completed.”

David Briggs, International Concert Organist and Composer, Artist-in-Residence, the Cathedral of St John the Divine, New York, Organist Emeritus, Gloucester Cathedral.  – “There is no doubt that the sound of a really great pipe organ can change lives – it can deeply move, and even heal, the human spirit. The prospect of a completely rebuilt and enhanced instrument at St Mary’s Cathedral is mouth-watering indeed. Rebuilding and renewing this organ will make sure that the Cathedral has an organ that not only the City of Glasgow can be proud of, but the whole of Scotland, giving the cathedral an instrument that will continue to attract first class choirs and organists from all over the world to the city, as well as supporting the cathedral’s busy program of services, concerts and national broadcasts. Please support this magnificent project as generously as you can.”

Thomas Totter, International Concert Organist, Birmingham City Organist, Organist of St Margaret’s Westminster, Visiting Professor of Organ, Royal College of Music, London – “The British choral tradition which is so carefully fostered by our cathedral musicians is the envy of the world. The British organ tradition is rather more taken for granted, and yet a pipe organ is as much at the core of cathedral worship as a choir. The organ at St Marys Cathedral was built in romantic style by William Hill in 1871. Since that time it has been rebuilt several times with mixed results, and the time has come for a more radical approach. Harrison and Harrison’s imaginitive proposal enhances the organ both tonally and visually whilst respecting and amplifying its original character.

As a regular visitor to both Glasgow and Edinburgh, in my opinion Edinburgh has the greater number of fine organs but Glasgow is the friendlier city! And the organs at Kelvingrove and at Paisley Abbey are as fine as any I can think of. The St Mary’s organ with its distinguished pedigree has the potential to join their ranks, and I am very pleased to support this exciting and important project.”

Dr. Kevin Bowyer,International Concert Organist, Organist to the University of Glasgow, Artistic Director, International Organ Festival– “Glasgow has become increasingly important in recent years as a centre of organ excellence in the UK, with new instruments and careful restorations of older ones. The city has developed an “organ culture” with many recitals and increasingly appreciative and musically aware audiences. The next step in this evolution is the rebuilding of the fine organ in St. Mary’s Cathedral. The musical tradition in the Cathedral has flowered under the direction of Frikki Walker and the choir deserves the support of a really great instrument. The scheme put forward by Harrison & Harrison will restore to the instrument much of the original builder’s vision. It will be tremendously exciting both as a solo instrument and also in support of worship in the cathedral. It will be a musical jewel of which the city will be proud. ”

What needs to be done?

After extensive research and quotes from a variety of builders, we have chosen Harrison and Harrison of Durham to undertake the work required. We have chosen them for the impeccable quality of the craftsmanship of their work, their reliability and longevity as a firm, and their imagination in meeting the requirements of the customer. They will restore, rebuild and renew the organ over a period of a year, ensuring it is fit for the future of our Cathedral.

Restoring, rebuilding and renewing the organ would involve every component part made from scratch in their own workshops, resulting in:

This scheme will hugely improve the dynamic range of the instrument, from the subtlest quiet sounds to the most magnificent full organ that will properly project into the church for an up to 300-strong congregation, support a Symphonic Choir, or underpin the most thrilling orchestral music, as well as play convincingly the solo organ repertoire of all styles and periods. It will provide a stunning visual feature in this significant, and beautiful Victorian Gothic Cathedral.

How much will it cost?

How can I help?

There are many plans under development for further fund-raising opportunities, and they will be publicised in due course.  Here are some you can support us with now:

Donations and Assisting with Funding

Any questions can be answered by Frikki Walker, the Director of Music, or by Michael Hitchman who is heading up the Fund-raising team. Visit this appeal website to find out more as we progress, or get in touch with us by email to organappeal@thecathedral.org.uk or by phone on 0141 339 6691.

At the current time, Sunday Worship in the cathedral is suspended for the duration that the City of Glasgow remains in Covid Level 4. An online service is offered on this website each week.

Online booking for Sunday services is available from Wednesday at 12 noon.