You are here: Home / Magazine / Rosemary Hannah – Summer Fun in the Young Church 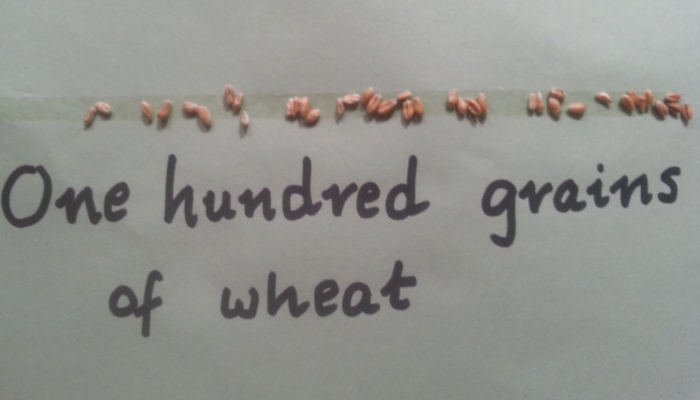 During the summer period, Rosemary Hannah and Sophie Agrell have been leading a special programme for the Young Church at St Mary’s. When asked about what it was like on their final Sunday, Rosemary said, “It’s been a blast”. In this article she explains why.

The most memorable moment during the summer holiday session of Young Church came when our youngest participant, not yet a year old, took water play to a new level and pulled the plug on the baby bath. Sophie Agrell, who was sitting on the floor beside it – well, you can fill in the rest from your imagination.

Sophie and I are the ‘holiday team’ at Young Church and the reason for the baby bath was that the children were exploring the power of water for themselves, using poured water to power toys. The baby bath was merely there to try and confine the water a bit.

Many, indeed most, of the Young Churchers are preschoolers, and they learn best through hands-on play-experience of the world. It is only helpful to tell them that water is a powerful thing if they can also experience that power for themselves. So they were pouring and scooping water as a way of getting ready to understand that the water to be poured at baptism the next week was also a very powerful thing. On the week of the baptism we did not have much time, so our talk about wind and Spirit (and how the words are the same in all the languages Jesus knew) was only briefly backed up by using breath to move bubbles and golf balls around the Synod Hall.

That was the only week we did not have two activities running at the same time, one overseen by Sophie and one by me. Our usual pattern was for the children to gather in one group while I told a story and then two different activities ran at the same time.

For example, during the week that we talked about growing wheat, the story was about how Jesus and his disciples ‘broke the law’ by rubbing corn in their hands on a Sabbath, so that they could eat in the corn field. That let us talk about when it is sensible to keep rules, and when one might need to challenge them – something which both Jesus and the grown-ups at St Mary’s often do. How would one decide? This gave the eight year olds something to think about but of course it went way over the heads of our youngest members.

One of the challenges of Young Church is catering for a very age-diverse group. There are between ten and thirteen children at most sessions, with perhaps twenty who attend at different times. Their ages range from eight or nine down to children under a year, often there with a slightly older sibling. Each week, every child needs to learn in a way appropriate to their stage of development, so what is on offer needs to be very diverse.

There was always an art activity of some kind, and a practical activity. The children moved from one group to the other as they chose, so that there was always an activity they could enjoy. We found that art worked best if it was something Young Church could engage with at different levels. After we had talked about Jesus in the wheat field, the practical task was grinding wheat in a coffee grinder, and talking about that process, feeling the grain as it broke down into flour (developing fine motor skills) and taking turns to hold down the switch.

The art activity was drawing with glue on coloured paper, then sprinkling on flour to create a picture. Here the older ones produced exquisite patterns, and the younger ones worked on mastering a paintbrush. Art activities over the summer included potato printing (one especially fine bunch of grapes is pinned up in the Synod Hall), water colour painting, and collage.

Our focus this summer was the Eucharist and baptism. We explored wheat from the seed, through its growth (members took home wheat to grow in a clear cup lined with wet kitchen roll) to its being made into bread. We made the bread together and everybody took home a roll to bake and eat. What we hoped was that children taking the bread at the Eucharist would have a much deeper understanding of both some of the Bible stories about wheat and bread, and of what bread is. When Jesus speaks of the bread that is his body, he already had in his mind the stories he had told about wheat and bread.

The older children carefully counted an hundred seeds and glued them into a stylised head as we reflected on his image of the response to his preaching (and what a lot of wheat that many seeds are). Always somewhere in his mind was the every-day task of the grinding up of the flour, and how, magically, the yeast expands that flour. All these lie behind that taking and breaking of bread. Jesus and his disciples were not as divorced from a sprouting seed turning into baked bread as we so often are today.

We crushed grapes in big jugs using little bottles of water as pestles and drank the juice as we began to come to terms with wine at the Eucharist. There is something brutal about crushing grapes, and we stopped to consider just how shocking Jesus’ words ‘This is my blood’ really were. The juice was delicious – we had to ration it very carefully. Now admit it – you all really wish you could be in Young Church, don’t you? Especially to see that plug come out of that baby bath.