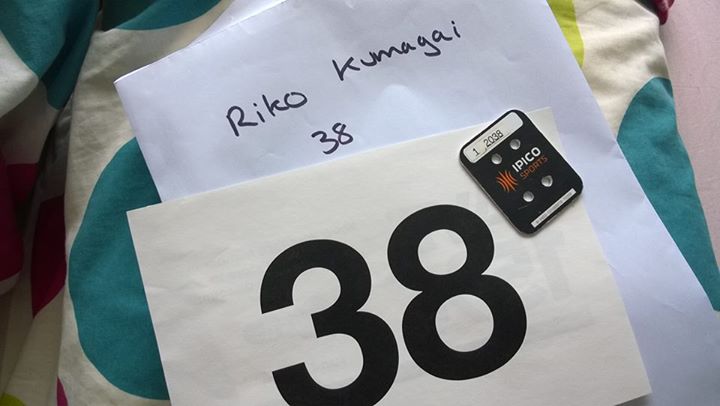 3000 kilometres in 365 days. To most of us who run a little, or have done so in the past, it’s very easy to do the simple maths and think, “Hmmm, that doesn’t sound too bad, does it?”. Well think again, but this time be honest. Most of you will know that Riko Kumagai, a regular at St Mary’s Cathedral and member of our choir, committed herself at the start of 2015 to do just this; to run 3000km in one year. So let’s blow the numbers apart a little and get a sense of what this really means.

Running 3000km would take Riko from Glasgow to Berlin and back (and not as the crow flies!). To many people, taking part in a marathon or even a 10k run is a huge achievement. Riko would have to take part in three hundred 10k events, or participate in nearly 72 marathons to cover this 3000km distance in one year. That’s more than one marathon a week, every week. The magazine ‘Runners’ World’ suggests that those training for a marathon cover 30-50 miles a week, and Riko is currently on track with this target. Sounds achievable until you factor in the recommended six weeks recovery time after each marathon. Pretty hard to do when you’re trying to run more than one marathon a week!

So how and why does she do it? Running has always been a part of life for Riko. When asked how old she was when she started running, she simply laughs and says, “You learn to walk, then you learn to run. Then you just keep going….why stop walking or running?”. Competing in athletics meets at school as a teenager in Japan, Riko’s talents lay in hurdling and sprinting. As you grow older, she says, the sprinting becomes harder and many women turn to longer distances, particularly after having children. Riko didn’t run her first marathon till after daughter Eilidh was born. Although able to drive, Riko chooses not to for environmental reasons, so running also fulfils a practical purpose.

Fitting her running into a busy life, working around family commitments and the unpredictable Scottish weather is a real challenge for Riko. Rain doesn’t bother her, however, in fact she says that running in different weathers makes you appreciate things that most people often miss. Regular barefoot runs of 5km keep her feet strong, and mixing in hills and sprints breaks up the routine of the weekly training. Maintaining a healthy lifestyle and keeping ourselves free of the unavoidable aches and pains is hard enough for most of us. To maintain her running schedule Riko needs to stay injury free, eat a healthy but calorific diet, get plenty of sleep and stay away from all temptations such as alcohol. Doing this day in, day out is tough, but thankfully Riko is already nearly two thirds of the way through the year without any major issues. To ensure that she clocks up the miles sufficiently each week, Riko will regularly run from her home in Newton Mearns to the cathedral for choir practice, or to a service on Sunday. Riko’s son Leo has been improving his cooking skills in order to help out with mealtimes while Mum is out running. Running, the desire to run and now the need to run, is built into every part of Riko’s life.

When asked why raise money for the St Mary’s Cathedral Music Endowment Fund, for Riko the answer is simple; to give back a little of what she and her family have received from worship and making music there. Riko was a member of Hillhead Baptist Church (where she still has strong connections) when her partner Paul heard about our Treble Choir. Frikki was musical director with the Bearsden Choir and was encouraging anyone with children interested in singing to come along.     Leo has been in the choir now for nearly eight years, and also takes regular organ lessons with Frikki where he is showing real talent. When Riko’s daughter Eilidh was old enough to join the treble section, Riko decided, with two children now able to sing in the choir, she might as well join them! St Mary’s Cathedral, and its choir, have become a big part of Riko’s life, and to her raising money to support this cause seemed only natural.

So far, Riko has raised nearly £2,300 towards the Music Endowment Fund. Her target at the start of the year was £10,000, so there is still quite a way to go with a third of the distance left to run. For every kilometre Riko runs, she needs to raise £3.33, which again isn’t much when you do the maths and have three thousand donations! Many of you will already have donated either to the cathedral, or directly to Riko to support her run. There will also be many who know that the deadline for handing in your donation is the end of this year, and aren’t in too much of a rush to get this done. Whatever your position, spread the news and let’s have a real push to get Riko as close as we can to her target figure. Riko needs no motivation, but it can’t be denied that seeing the fund-raising total rise will be a big boost!

You can donate through Riko’s web-page at http://uk.virginmoneygiving.com/Riko (don’t forget to add Gift Aid if you are eligible). Alternatively cash or cheques made payable to St Mary’s Cathedral, with ‘Riko’s Run’ clearly written on the back can be handed to any of the stewards on duty.

Please also follow and support Riko’s progress on Facebook by searching for ‘3000km in 2015’. Rikos next big run is the Loch Ness Marathon on 27th September.