You are here: Home / Magazine / Sophie Agrell: In the steps of St Ninian 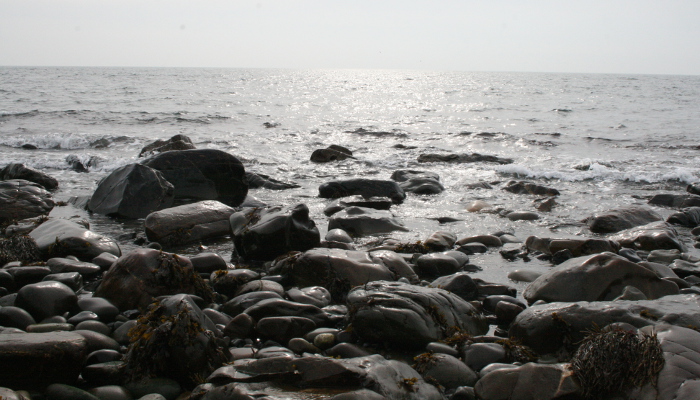 The cathedral was dim, a far cry from its Sunday brightness, as we, warmly dressed and sensibly shod, put down our bags and rucksacks and gathered in a circle of friends and strangers around the altar. We prepared ourselves to journey towards the sea with St Brendan’s prayer in preparation for setting sail, the prayer of a man preparing to leave all he knew for a strange land as so many did in the early centuries of the church, and so many thousands do today.

“Shall I turn my back on my native land, and turn my face towards the sea? Towards the elements, the noise, the wind, the spray, the hostility, the misunderstanding, the abuse, the ridicule, the uncertainty, the fear, the isolation?”

Unlike early Christian explorers or modern refugees, our journey was not a final departure laden with fear and supported only by trust in God but a day pilgrimage to Whithorn, undertaken in modern comfort on a luxury coach by our group of 32 pilgrims, led by Rev Cedric Blakey and Rev Kirstin Freeman.

It is a surprisingly long way to Whithorn, particularly when a closure on the A77 sent us on a winding diversion through many extra miles of the beautiful countryside of the south west of Scotland. When we arrived at Whithorn, we were very thankful for the thoughtfulness of the kind people at the Whithorn Trust visitor centre, who had arranged tea and coffee in generous quantity in an upstairs room. Some of us – me among them – felt an imperative need for cake after the early start and long journey and were not disappointed. The baking in the visitor centre cafe is notably good!

Suitably refreshed, we were driven out beyond the town to our first real ‘destination’ – St Ninian’s cave. Like so many other figures in the early church and since, Ninian is said to have spent time in a cave on the beach, seeking quiet and space to pray and meditate away from the community in which he lived. Approached through a wooded glen, the bay gives a tremendous sense of peace even today with no houses visible, just the pebble beach with sea-rounded stones in a variety of colours.

The cave itself is small and narrow, marked by centuries of inscriptions from visiting pilgrims, some of whom have also left stones from the beach or small crosses as symbols of their prayer, intent or presence. The site has been a place of pilgrimage for over 1000 years, with the earliest carvings (now in the Whithorn museum) dating from the 700s or 800s.

We gathered in a circle outside the cave for a very simple short Eucharist, led by Rev Kirstin Freeman. A central element of the service was the idea of laying down the burdens of worry, anxiety for self or others, the need for forgiveness that we had carried on our pilgrimage. In turn, we each poured out a little water from a glass as a symbol of all that we were relinquishing and laying down in God’s care. It was very peaceful with the sole accompaniment to our prayers the rapid rhythm of the waves sweeping onto the rocks in front of the cave and the slightly softer sound as each wave ran up the pebble beach.

Thus spiritually refreshed, it was time for bodily sustenance and we scattered to find picnic spots and enjoy the surprisingly warm sunshine and the beauty of the sea. For many people, this quiet relaxed time on the beach was the highlight of the day – certainly it was for me.

All too soon it was time to return to the bus (pausing to pick brambles) and to Whithorn itself where the group again separated to make the most of the warm, sunny afternoon as seemed best to them, whether eating ice cream, taking a guided tour of the archaeology or heading for a pub to watch Scotland’s crucial game against Samoa (Scotland won!) in the Rugby Union World Cup.

I explored the ruined priory, built to house the relics of St Ninian. The Romanesque ruins we now see form part of what became a far larger structure, a combination of cathedral, priory and parish church, although it is hard to get a sense of the scale of the mediaeval structures, so completely have they vanished beneath the old graveyard, itself full of old stones telling complicated stories of families’ misfortunes, long lives or the kindness of friends.

Earlier stones, mostly dating from the tenth and eleventh century and unearthed in Whithorn and the surrounding area, form the core of the priory museum. While the ‘Latinus stone’, Scotland’s earliest Christian monument with a Latin inscription and a chi-rho symbol is probably considered the ‘star exhibit’, I particularly enjoyed some of the stones with ‘Celtic’ interlace patterns – not least because the carvers made mistakes! Seeing the points where a curve had been carved in the wrong direction or a mistake made in the rhythm of the pattern made the long-dead carvers human and living for me in a way perfection could not.

After tea, more delicious cake and a brief service in the priory ruins, it was time to head north back to Glasgow where eventually tired pilgrims arrived, enriched by history and the beauty of Whithorn and St Ninian’s bay.