You are here: Home / Magazine / Kelvin Holdsworth: What kind of church is this? 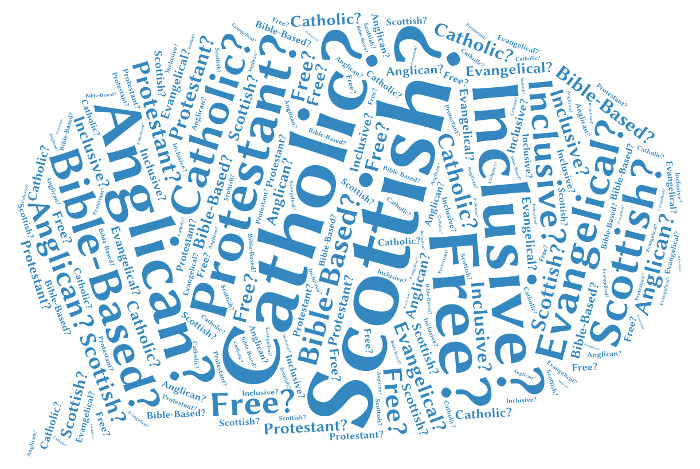 The following article from the Provost is also available as a printed leaflet in church.

People sometimes use short-hand descriptions of different kinds of churches as a way of trying to work out their character and ethos. Often they are trying to work out whether or not they would feel welcome. St Mary’s Cathedral has a diverse congregation. Many of the people who attend this church come from different cultures and traditions – so people are welcome here whatever labels they attach to themselves. However there are still often questions about what kind of congregation this is and this leaflet is an attempt to answer some of those questions.

Is this a Catholic Church?

One of the questions that is most often asked by people visiting St Mary’s for the first time is “Am I in a Roman Catholic Church”. People say that the building “looks catholic”. Sometimes they ask whether it was formerly a Roman Catholic Church before becoming Episcopal. In fact this building was built to be a church for an Episcopal congregation which has its roots in the early Christian community of this city. Although the building has changed a bit through its history, those who built it were clearly building something that would indeed “look catholic”. This is a place where the services are celebrated which also “look catholic”. Like the building itself, the liturgy here is designed to appeal to the senses and to stimulate them all as a way of getting in touch with God.

The worship here doesn’t just look catholic – it is catholic in the sense that the sacraments are celebrated here – baptism, holy communion, marriage, confirmation, reconciliation (sometimes called confession), ordination and unction (anointing with holy oil for healing). Some members of the congregation speak of coming to mass on a Sunday, almost everyone would say that they believe in the Real Presence of Christ when they receive the bread and wine though they might be a bit reticent about calling that transubstantiation and would probably prefer not to try to explain it.

However, this congregation is not part of the Roman Catholic Church. It belongs to the Scottish Episcopal Church which, like the Roman Catholic Church (and Orthodox churches, Methodist churches, Presbyterian churches etc) is one of the churches that are part of the Christian faith worldwide. Though the worship here seems very familiar to Roman Catholics, and many members of the congregation have their roots in that church, there are some differences – we do not, for example have a pope. We joyfully affirm the ministry of both men as women as priests. We also have different social teaching. This is a place where gay couples can be blessed and where divorced people are welcome to receive communion and in most circumstances to remarry if they choose to do so.

Is this a Free Church?

People sometimes use the term “Free Church” to speak of a church that isn’t aligned with the state. In Scotland, the only church which is aligned with the state is the Church of Scotland which thinks of itself in a particular way as Scotland’s National Church. The Church of England is unique in the Anglican Communion in having a strong connection with the state as the established church in England with bishops in the House of Lord and all kinds of connections with the civil life of the nation. St Mary’s belongs to the Scottish Episcopal Church which has had links to the state in the past but not since 1689. In that sense it is a free church.

Is this an Independent Church?

Sometimes people speak of an Independent church meaning one that is completely independent of other congregations and which doesn’t belong to a denomination and can make up its own rules. St Mary’s is one of the congregations of the Scottish Episcopal Church which is one of Scotland’s churches and the only Scottish church to be part of the Anglican Communion. These connections with others mean we are not completely independent and in that sense, not a independent church. This also means that the church is governed according to the Canon Law of the Scottish Episcopal Church and that we have a bishop in the form of the Bishop of Glasgow and Galloway who also cares for other churches in this diocese, which reaches from just north of Glasgow right down to the England-Scotland border. The Scottish Episcopal Church however does value its independence and has different rules and conventions to many other churches.

Is this a Scottish Church?

Yes, the Scottish Episcopal Church that we belong to is very much a Scottish church. It isn’t the Church of England in Scotland and it is neither correct nor polite to refer to it as the English Church. Here at St Mary’s, the congregation comes from all over the world.

Is this a Bible-Believing church?

People sometimes talk about “Bible-Believing” churches. This seems sometimes to be used to describe Christians who would themselves be happy to be referred to as fundamentalists – believing that the way we live today can be determined directly from things that are in the bible. It is also shorthand for churches which teach a particular belief about salvation which they believe the bible teaches.

In that sense, St Mary’s doesn’t really fall into this category. However, many people here would say that they had a huge reverence and respect for the bible – so much respect that they don’t believe it should be abused by being used as something it isn’t.

The bible is a collection of ancient literature which documents the experience of the Jewish people as they developed their understanding of who God is and how people should relate to God. It also consists of the early testimonies of those who came to believe that Jesus Christ was the Son of God. As such it contains poetry, history (written from particular perspectives) songs, accounts of speaking truth to power and mystical writing which people have wondered how to interpret from the very first times they were written down.

Here at St Mary’s we have such a respect and fascination with the bible that we read it a lot in our public worship – much more than many churches which would be described as “bible believing” churches.

We don’t believe the bible is a rule book – we think it is far more interesting than that.

Is this an Anglican church?

Is this an Evangelical church?

If “Evangelical” is being used as short-hand for a church which wants to grow and spread the good news about Jesus then we are an Evangelical church. If it is being used to describe “bible-believing” churches (see above) then probably not. However it is the case that quite a number of members of the congregation have got backgrounds within churches that would be described this way.

Is this a Protestant church?

Asking whether this is a Protestant church is sometimes a way that people use to get their heads around whether we are catholic or not. In the sense that we are not part of the Roman Catholic Church then some people would think of us as a Protestant church. Certainly, we are one of the parts of the church which came from the Scottish reformation. However it is also the case that we might be thought of as the church which emerged from the Scottish Reformation which cared most about continuity with our common ie catholic inheritance. So, some people in the congregation would say that they didn’t think of St Mary’s as either Protestant or Catholic in that sense. Others, for similar reasons would want to claim that we are both.

Is this an Inclusive church?

This is a relatively new way of describing congregations. Very often people who are asking this question are asking whether it is a place that gay people are fully welcome and in which men and women are treated alike. If those are the questions then St Mary’s is an inclusive congregation.

However, inclusive can mean much more than that. We also hope to be a church that people which people with different disabilities will find welcoming. These may not be visible disabilities either. We are aware, for example that some people with autism find the predictable kind of worship that a regular liturgy brings to be easier to worship in than churches where you don’t know what’s coming next.

There are increasing numbers of people who don’t think of themselves as fitting into the binary categories of male and female and there is also increasing awareness of people whose sense of themselves has led them to transition from one gender to another. St Mary’s is a place where such people are welcome just as much as those for whom gender is certain or who think of their own gender having been determined at their birth.

In recent years, the congregation has become more diverse, welcoming people from Nigeria, the USA, Canada, Japan, India, South Africa and many more.

Is this an Episcopal church?

There’s no doubt about this one – this is one of the cathedrals of the Scottish Episcopal Church. The word “episcopal” comes from a Greek word and shows that we believe that having bishops is part of the way we are governed. There are seven bishops in the Scottish Episcopal Church and they each work in a different diocese ie their geographical area. There is no archbishop in the Scottish Episcopal Church. The bishops elect from amongst themselves someone to act as their spokesperson – this bishop is called the Primus. They remain as the bishop of their diocese. The congregation that now forms the cathedral congregation was not always on this site having endured some years of persecution after having been expelled from the medieval cathedral in the High Street in 1689. Throughout this time, they have always maintained their allegiance to Episcopal governance and so have always had a bishop.