You are here: Home / Archives for LGBT / LGBT History Month

This badge was one of the first that was produced and was made for Glasgow Pride in 2015. It is one that is often worn by members of St Mary’s Cathedral on Pride marches.

St Mary’s is a diverse congregation in Glasow that proclaims itself to be open, inclusive, and welcoming.

We march at Pride each year as part of a group drawn from the whole of the Scottish Episcopal Church, and we meet people every year who are surprised and delighted to see that a church has come out to be with them. They see a priest carrying a rainbow umbrella. They see another one waving a couple of placards as he bops along to Dancing Queen. Our group is made up of clergy and laity, of the old and the young, of people drawn from all over the Diocese and from all over the world, of our LGBT members and our straight allies. As our banner makes its way through the streets of the city centre, the people in the crowd nudge each other, smiling and pointing.

“Look,” they say to one another. “Look! The Scottish Episcopal Church Welcomes You!”

This is our strapline, our shibboleth, and the way we try to live.

We are open. We are inclusive. We are welcoming. We are very, very proud. 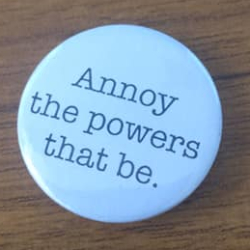 This badge acknowledges that change does not simply come about on its own but comes about because people work for it. The act of challenging conformity is intrinsic to the struggle for justice in the world. The various movements that have led to the freedoms that LGBT people enjoy are intrinsically connected to other movements for justice and progressive change.
Often change happens because a very small number of people believe something to be right and start to annoy the powers that be.
When a very small number of activists started gathering signatures for the petition on equal marriage (many of which were gathered by members of St Mary’s Cathedral, Glasgow) they were simply doing what people who want change have always done – organising, dreaming, gathering and worrying away at the problem, refusing to let it go.
It is very much the case that when the equal marriage movement was beginning, several of the activists involved did not believe that they would see the change that they were hoping for happen within their lifetimes.
Change happened because people were prepared to ask what the next small step would be towards the final goal and then taking that step. Sometimes people got annoyed. In the end, everything changed.
The fact of that change is now a challenge. If such a change could come about within only a few years, what else could be changed for good in society by a small group of dreamers? 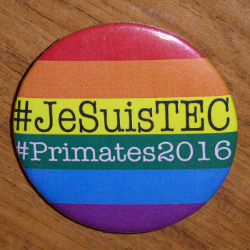 This badge was produced in 2016 when there was a global meeting of the Anglican Primates – the archbishops, primates and presiding bishops from around the Anglican World.

The Anglican Communion is connected by may threads and one of the threads that binds us together is the contact that LGBT people have with one another across the Communion. This means weeping when others are persecuted and rejoicing when they have something to celebrate.

Much newsprint was given to describing the US based church as having been thrown out of the Anglican Communion. In fact, that didn’t happen. People from the US based Episcopal Church and subsequently people from the Scottish Episcopal Church were not allowed to represent the Anglican Communion to others. In almost all cases this was a symbolic wrap of the knuckles. In a few cases though it meant personal snubs of those who had previously served their churches in this way.

LGBT Anglicans remain connected with one another and there are many opportunities to learn from one another. Many in the churches that have embraced the marriage of same-sex couples are in constant touch with those who are fighting similar battles in churches which have not done so yet. 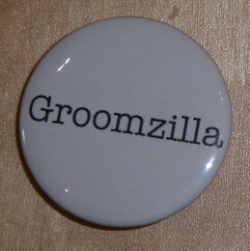 One of the things that changed during the various campaigns for equal marriage is the kind of visual images that the general population have about same-sex couples. All of a sudden the actual weddings of same-sex couples became one of the ways in which people think of LGBT people.
St Mary’s was one of the congregations which took a lead in the campaign to allow same-sex couples to get married in church and the first such wedding here took place on the first day that it was possible.

A number of couples had their nuptials at St Mary’s before that date too as clergy were asked to bless civil partnerships. Some of those weddings have been very simple ceremonies – in one case a couple who had been together for 50 years who came to stand before the altar to receive God’s blessing of their relationship with just one other person present – someone who knew them when they first got together. In other cases, the weddings have been fabulous celebrations for many people. Whether small or large, these weddings have all had the common factor that people feel relieved to be able to express their love in public and be able to have that love acknowledged by others and blessed by God.

Sometimes those planning weddings can turn into groomzillas or bridezillas. God loves them all and here at St Mary’s the clergy and musicians work hard to ensure that people can have a wedding to remember. 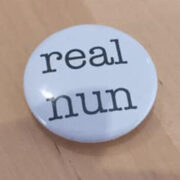 The first of these badges was made for Sister Helena Barrett, an associate priest at St Mary’s Cathedral and a member of the Companions of Our Lady and St Mungo. When she was ordained in the Episcopal Church of the United States of America in 1977, Sister Helena was the first openly lesbian woman to enter the priesthood. She was present at the first Pride March in New York City in 1970, and she has spent much of her life campaigning for the inclusion and dignity of all people in the church.

Writing on the fortieth anniversary of her ordination, Integrity USA said of her: “The Reverend Dr Ellen Barrett is one of the pioneers of our faith. She is one of our icons in the struggle for equality. She is one of our elder statespersons who led the way so that those who followed would have an easier path to take.”

Sister Helena can be seen in this video talking to the Provost about her life as a priest, a nun, and an activist. This was a Forum conversation which took place in the cathedral as part of Mardigla in 2019: 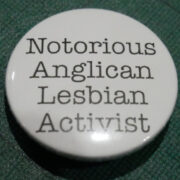 Jayne Ozanne is a lay member of the General Synod of the Church of England who has been campaigning for LGBT equality within the church since 2014. She has campaigned on many issues, including marriage equality and the banning of “conversion” or “reparative” therapy, and in 2017, she met with Pope Francis and discussed some of these issues with him. In the press coverage of this meeting, she was criticised by conservative members of the Church of England and was referred to by one journalist as a “Notorious Anglican Lesbian Activist”. A phrase that was clearly intended by the conservative Christian press as an insult was claimed wholeheartedly by the Anglican lesbian activists of the Anglican Communion, – including Jayne herself – and was taken up as a badge of honour.

This badge is another in the series inspired by the famous Stonewall posters.

Many religious LGBT people will identify with the experience of being rejected by both sides — unwelcome in their religious community because of their sexuality, and equally unwelcome in the LGBT community because of their religion. This badge was a call to LGBT people and organisations, including Stonewall, to recognise and welcome the many people of faith who exist within the community.

The Scottish Episcopal Church has amongst it a number of confident bisexual role models.

In 2015, Stonewall produced their “Christian Role Models” guide, which can be read here: https://www.stonewall.org.uk/system/files/christian-role-models.pdf They have gone on to collaborate with people of diverse faiths to produce resources for LGBT people of faith. 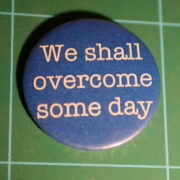 This badge was made in early 2015, at a time when the Scottish Episcopal Church was quagmired in a listening process about the issue of LGBT people in the church. It was a frustrating and painful time for the LGBT community who were already in the church, and there were many days when it felt as if the whole process would simply allow the question of equality to be kicked into the tall grass, there to be lost and forgotten.

Taken from the gospel hymn that became the anthem of the American civil rights movement for Black lives in the 1960s, many people forget that the lyrics to that anthem are not “We Shall Overcome” but “We Shall Overcome Some Day”. A small difference, but a difference that feels far more real and true when the fight seems slow and hard. It remains real and true for many people in many parts of the world today.

You can hear a short clip of Joan Baez singing “We Shall Overcome” at the 1963 March on Washington DC here: 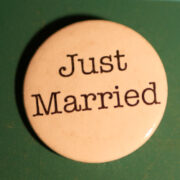 St Mary’s Cathedral is known for its magnificent weddings — organs, choirs, gorgeous liturgy, bells, whistles, and that one time, when there was a trained owl. The first public same-sex blessing of a civil partnership was conducted in the building 2008, and when it became possible to conduct same-sex weddings in Scottish Episcopal Churches in September 2017 St Mary’s was amongst the first of the churches to do so. We are also happy to conduct marriages of opposite-sex couples in the Cathedral, and they are every bit as fabulous.

These badges are sometimes given out by the celebrant to the newly married couple after their service.

Some pictures of weddings at St Mary’s can be seen here, on the Weddings page of the website:

Getting Married at St Mary’s 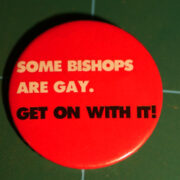 For as long as there have been bishops in the church, some of them have presumably been gay. What has been less common through the church’s history than appointing bishops who happen to be gay is being honest about doing so.

The first bishop in the Anglican Communion who was appointed in the full knowledge that he was in a same-sex partnership was the the Rt Rev Gene Robinson, the Bishop of New Hampshire in the USA. Bishop Gene visited St Mary’s to celebrate the eucharist and preach the gospel on 3 August 2008, during a Lambeth Conference. At the time, Bishop Gene was barred from attending the conference (supposedly the international gathering of all Anglican bishops). He was also barred from celebrating the Eucharist at every altar in the Church of England.

He was welcomed with much joy in St Mary’s.

Anxiety about the sexuality of candidates for the Episcopate remains a problem in very many parts of the church. There is now no bar to someone becoming a bishop in the Scottish Episcopal Church who is married to a same-sex partner. This was resolved in 2017, only when the church passed legislation enabling same-sex couples to marry in church.